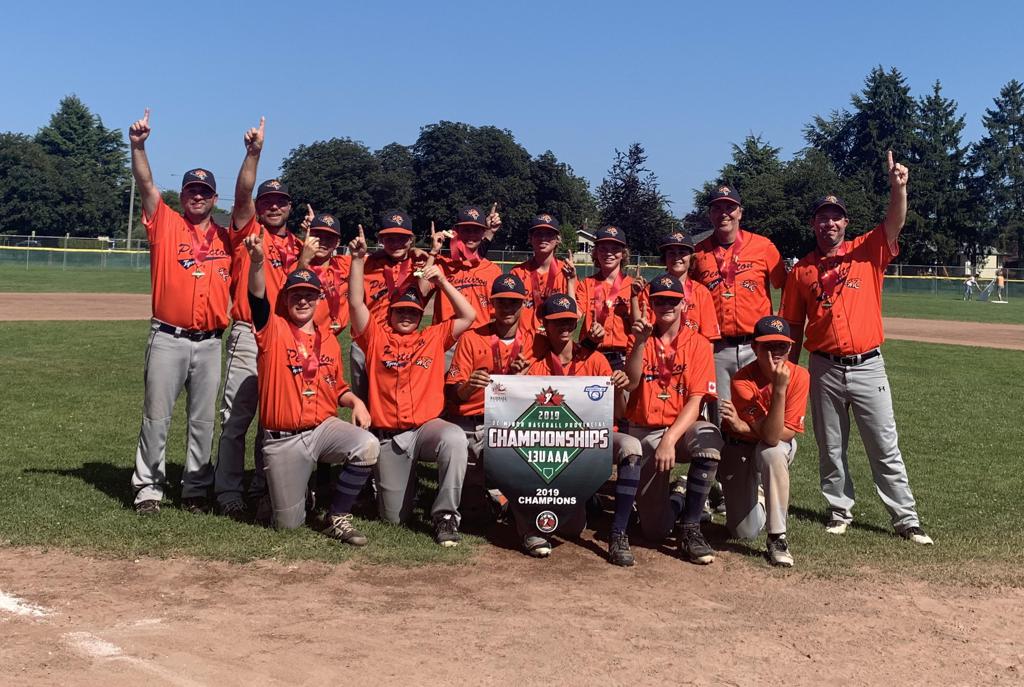 This past weekend the Tigers 13U AAA team went 6-0 to win BC Baseball provincial gold in Victoria!

The tournament got off to a bit of a shaky start in a 16-15 come from behind win over Prince George.  A mammoth home run by Ethan Woodbeck was the highlight of that game.  The Tigers next opponent was a familiar foe the Abbotsford Angels.  As predicted the Angels started their star pitcher, and one of the top pitchers in the province, David Krahn.  The Tigers countered with their own star pitcher Ethan Woodbeck who through 4 innings of no-hit ball, striking out 7 along the way.  Both pitchers were dominant, but the Tigers offence couldn't be stopped and managed to plate 5 runs.  The Tigers were lead at the plate by Nate Weber who was 3/3, along with timely doubles by Kaden Collins and Cole Wadsworth to drive in runs.

In the 3rd round robin game the Tigers squared off against an extremely tough Chilliwack Cougars team.  Carson Burnett took the hill for the Tigers and threw 4 strong innings allowing 4 earned runs and striking out 8 Cougars along the way.  The Tigers were lead at the plate by Joey Conquergood who went 2/4 on the day with a single and a deep double in the game, but the real highlight came in the 7th inning when third baseman Cole Wadsworth snagged a very hard hit ball to his left, spun 360° and threw a seed across the infield to get the speedy centre fielder for the Cougars Lucas Dykstra.

The fourth round robin game saw the Tigers face off against the Burnaby Braves.  In a previous meeting between the two teams the Braves were victorious, but today they would meet a well rested, much stronger and resilient Tigers team.  The Braves started their star pitcher Stefano Siniscalchi and the Tigers countered with their crafty right hander Ronan Castelone.  Castelone went 4 strong innings allowing 3 earned runs.  Additionally, the team had consistent offensive contributions coming from every player in the lineup allowing the Tigers to outlast the Braves 10-9.

That win put the Tigers 4-0 and first place in their pool.  Abbotsford finished 3-1 and second place in the pool.  In the other pool Vancouver Community finished first with a 3-1 record and White Rock finished second with an identical 3-1 record.  That setup a semifinal matchup between the two coaches of the BC Minor 13U Select Team Randy McKinnon from the White Rock Tritons and Rob Burnett from the Tigers.

This game was one for the ages, and one that many parents, players, coaches and officials won't forget for quite some time!  The game began with White Rock getting out to an early 3-0 lead with some scrappy heads up baseball and timely hitting.  The Tritons lefty pitcher Sam Persaud kept the Tigers bats silent with an excellent mix of off-speed pitches and well placed fastballs.  In the 3rd inning the Tigers struck with a solo HR by Cole Wadsworth deep over the right centre field wall making the game 3-1.  The Tigers managed to scratch out another 3 runs over the next 3 innings while allowing only one...making the score 4-4 going into the top of the 7th.  Zach Heck retired the Tritons 1-2-3 by striking out the side in the top of the 7th inning in dominating fashion by throwing fastballs in the low 70's and a new slider that he has developed that is absolutely filthy.  The Tritons countered with their big hard throwing closer Sam Tusa.  After quickly retiring the first two Tigers, Tusa left a curveball out over the plate and Cole Wadsworth smashed it over the centre field wall for a game winning walk off solo home run...forever coined as a Wadsoff Home Run.  The win put the Tigers in the finals against the Abbotsford Angels who disposed of Vancouver 11-7 in the other semifinal.  The Tigers started Carson Burnett who absolutely dominated the Angels hitters by throwing 3 1/3 innings of perfect baseball...retiring the first 10 batters in order before giving up a soft single.  His strike to ball ratio was an off the charts 33 to 4 in the first 3 1/3 innings.  His final line was 6IP, 6H, 1BB, 5K and 3ER...throwing 81 pitches, 60 of which were strikes.  The offence was lead by timely hitting by Burnett, Luke Sandham and Tyler Messing.  The game ended again with closer Zach Heck on the mound shutting down the Angels 1-2-3 and all of the boys joining him on the mound to celebrate the win!

What a season!  Congratulations to all of the kids on this team who worked so hard all winter, spring, and summer to earn the title of BC Baseball U13 AAA Provincial Champions!